Mystery is finding its End-point, Looking at Snapdragon 808 for LG G4

The rumour mill of LG’s next flagship is getting big with each passing day. As the day of LG G4 official launch is coming closer, the bunch of hearsays is becoming stronger day by day. Well, we have gone through numbers of canards, which have covered almost every part of this upcoming handset. But, few parts are still in highlight, like Processor.

The upcoming LG flagship however has been talking for its SoC part since the first hearsay. Recently, a twitter user has given it a new way by posting an image of purported handset, which is suggesting about the Snapdragon 808 Soc. Well, this new leak has definitely caught you unawares as the device was surfaced over web since the rumour begun for it, with Snapdragon 810 chipset, but it’s the fact. The recent leak by a Twitter user has made us to believe on it. 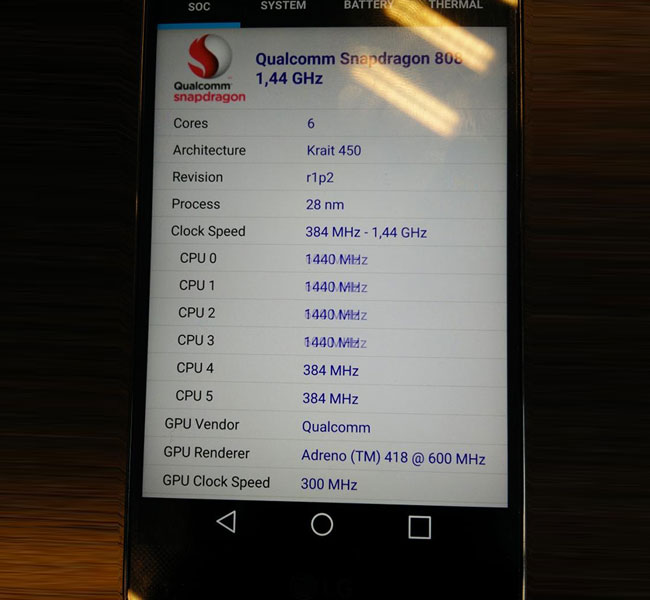 This processor has a dual-core ARM Cortex A57 and a quad-core A53 which is based on 64bit architecture. If the leak turns into the real, then LG G4 would be the first device to equip with such SoC. It could be possible that company has changed its mind to power its new flagship with the Snapdragon 810 because it is going through several flaws and glitches. Heating problem is the biggest among them. Hence, the Snapdragon 808 has come in lights. Well, whatever it is, we cannot vouch for it until its official launch on April 28.

On the other side, the G4 was leaked on a website with leather back panel. A teaser video was also posted officially for its QHD display on YouTube, describing about “all QHD display are not same” with its 5.5-inch Quantum IPS display.

A Plus for the LG G4! Revealed in a Benchmark Listing
Views: 1247

Get the Chance to Receive Your LG G4 from Superstar Big B
Views: 1735