The global giant in smartphone manufacturing, Nokia, when acquired by the IT grand chief Microsoft, revealed the glimpse of future gadgets from their house. The series of Lumia phones, ending with either a “30” or “35” started popping out of their sack. The update of Windows Phone OS called to be 8.1, has also been released for developer’s preview. Nokia has always been a king in the segment when the word is about build quality and camera clarity. To keep people in the same dope, Nokia is to release its next dose, Lumia 730.

As per the rumours say, the alleged smartphone is going to be yelled as a “Superman”. This highly expected phone is aspired to be having a better configuration than its highly popular predecessor Lumia 720. The phone seems to be built with a 4.7 inch screen. The key factor in the applause to the phone is the 5 megapixel camera for the purpose of selfie. The spy images revealed that the device is covered with a copyright mark, which reads “Prototype Property of Nokia”. 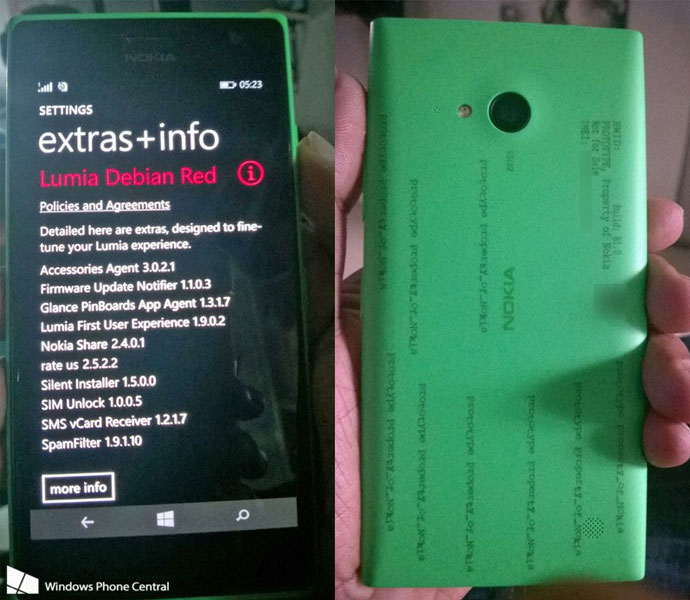 The spy images also divulged that the gadget will come equipped with Lumia Debian Red update, which is forecasted to be the first update of Windows Phone 8.1. As it is to cite that the developer’s preview and the Alpha version of Cortana have been already released. The smartphone averred here might solve the issues of people holding a deep breath for a windows phone, which will make out their purpose effectively.

The Social media and artistic nature of the web has raised the trend of sharing views and photographs. The phones with front facing cams have started receiving preference, not for vis a vis chats, rather for the purpose of selfies. The Nokia will pull this trend to its greatness, as we hope.