Reliance owned LYF has silently introduced a new smartphone in the market. Dubbed as the Reliance LYF C451, the smartphone caters to the entry-level segment and carries a price tag of Rs. 4,999. The smartphone is listed on the company’s official site, which already says the device can be purchased from Reliance Digital stores.

The Reliance LYF C541 has some decent specs under-the-hood. The smartphone has a 4.5-inch FWVGA display, but more importantly, it is powered by the Qualcomm Snapdragon 210 chipset. The SoC is accompanied with just 1GB of RAM, and Adreno 304 GPU. The device has 8GB of internal storage, which can be expanded up to 128GB with a microSD card. The screen is protected by 2D Asahi Glass.

Reliance has added all the basic sensors such as an accelerometer, proximity sensor, and ambient light sensor in the phone. The phone also comes with various motion & gesture controls such as flip to mute, double tap to wake, slide up to unlock, slide down to open the camera, Music Player Control gestures, Lock Screen gestures for jump-starting Apps, etc. 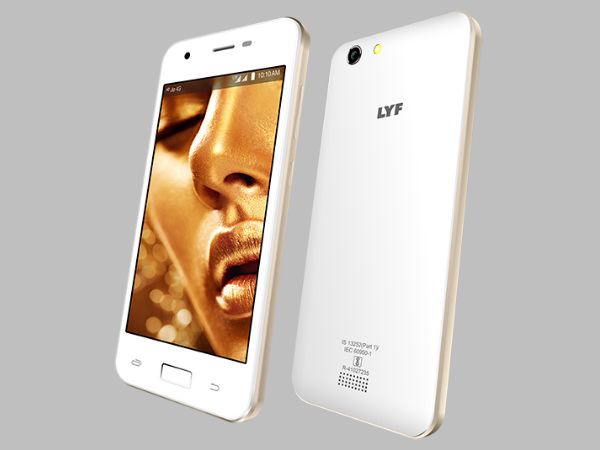 The device runs on Android 6.0.1 Marshmallow, sadly, and there’s no scope for Android 7.0 Nougat update as well. The phone has connectivity options such as 4G LTE, VoLTE, Bluetooth v4.1, Wi-Fi, GPS, USB 2.0, and USB OTG support. The LYF C541 is a dual SIM smartphone, and both the SIM slots are 4G enabled. However, at one time, only one slot can be used for 4G, while the other one will work on 2G.

Optics wise, the handset rocks a 5MP rear camera with autofocus and LED flash support. Up front, there’s a 2MP selfie camera. The device measures 9.8mm in thickness and weigh in at 165grams. Lastly, the device is backed by a 2800mAh battery, that is rated to deliver up to 12.5 hours of 4G talk time, up to 6 hours of video playback, up to 45 hours of audio playback, and up to 240 hours o standby time.