Yesterday, the Japanese Conglomerate Corporation: Sony kicked off its flagship smartphone: Xperia Z3+ in Indian marketplace, which is on the high peak of discussion. And now, yet another handset of tech giant has started creating buzz over cyberspace that carries a Model Number: E5663. Notably, this unofficial gadget has made its appearance in GFXBench database, whereby its almost specifications have come into view.

As mentioned in the brochure posted on benchmarking website, handset will feature a 4.6-inch display with a pixel resolution of 1920 x 1080p. Sony has utilized octa-core MediaTek MT6795 SoC clocked at 1.9GHz along with PowerVR Rogue G6200 GPU in its forthcoming creation in order to provide flawless mobile-experience. 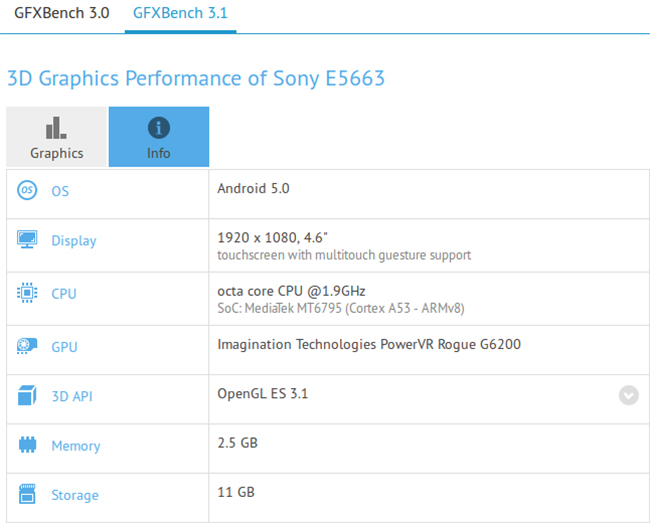 However, inclusion of a 20-megapixel rear shooter alongside a 12-megapixel selfie snapper has been mentioned in catalog, but device might comprise a 21-megapixel primary camera accompanied by a 13-megapixel front-facing sensor, which we usually find in smartphones. In addition, its main snapper will be decked with some attributes like autofocus, face detection, flash, HDR photo and touch focus.

Paired with single SIM card slot, phone will run on Android 5.0 Lollipop and assimilate 3GB RAM with 16GB of internal memory. Rest of the listed specs include, NFC, GPS, Bluetooth and Wi-Fi connectivity options, so it seems safe to say that handset will also be compatible with 4G LTE networks. Moreover, it will be integrated with accelerometer, compass, proximity and light sensors.

Well, firm is still tight-lipped about its next-iteration, so we will have to wait for pricing and availability details. At this place, a report of Xperia Blog has speculated that Sony E5663 is destined for India due to its emergence on an Indian Import Database site: Zauba.