Will Lumia 640 be Making Entry in Microsoft Budget Bandwagon

Microsoft seems all set to bring another affordable smartphone in the Lumia series. Well, the Redmond giant has already blossomed enough number of Lumia devices in market, adding one more name in the list will give a boost to its business. Well, the rumours are roaming around the internet world from a long time for a new budget Lumia device. To prove them genuine, a document has been leaked and spilled the beans.

The Lumia 640 has reportedly been spotted in a document. As per this leaked document, the upcoming budget Lumia smartphone has got the approval from Brazil’s National Telecommunication Agency Anatel. And, all this has conferred us with device’s name and few specifications. With model number RM-1109, the Lumia 640 has been rumoured as another budget offering under Microsoft branding. 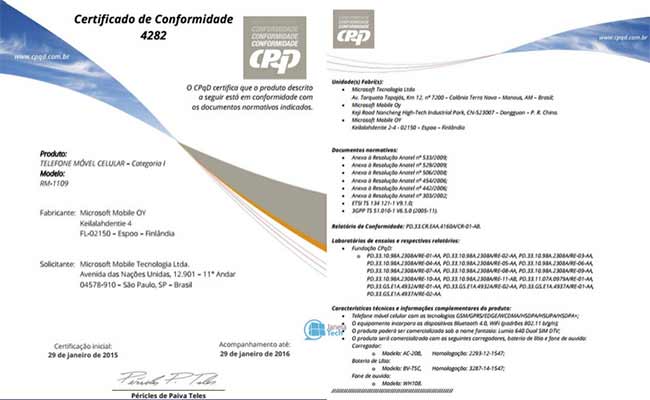 As per the report, it will support digital TV and come loaded with HSDPA+, Wi-Fi, Bluetooth 4.0 connectivity options. It is said to have a 2500mAh battery and dual SIM slot. It is speculated as a successor of Nokia Lumia 630 and Lumia 635. However, no leak has been received for its operating system. Whether it will support Windows 8.1 as its cousins or will run on the new Windows 10 OS.

Well, all will come in the proper vision after the launch. It is expected that this handset will make its appearance at upcoming MWC 2015 event in Barcelona. If these speculations are going in the right direction, then this would become the fourth budget Lumia smartphone by the Redmond guys. We will update you with each detail whenever we receive something for the same. Stay tuned with us at our GSMA MWC 2015 page.