The Fourth-gen Jeep Wrangler made debut at the 2017 LA Motor Show and now anticipated to enter the Jeep Showroom in India very soon. It is the much awaited all-new JL series, spied undergoing ARAI I (Automotive Research Association Of India) tests for accreditation before the final launch in India.

The spy images reveal its smoother and more modern looks, further enhanced with the three-door version of the JL series. The JK series with the four-door version in Unlimited is available only in India but this time the JL series will be offered with both the options.LED headlamps, LED fog lamps and LED forward turn signals are the new add-on for the Indian launch. Square-ish tail lamps with LED graphics is one of the refreshed features.

The interior has been revamped entirely and represents more functionality with pared-down features. The front seats are redesigned with adjustable bolsters and lumbar support. Heated front seats and steering wheel are highlighted features of the larger greenhouse of the new Wrangler. Entertainment has been taken care with an Instrument cluster that features either a 3.5-inch TFT display or a full-blown 7-inch screen which showcases chunks of information such as media playback, tyre pressure, or digital speed readout etc. 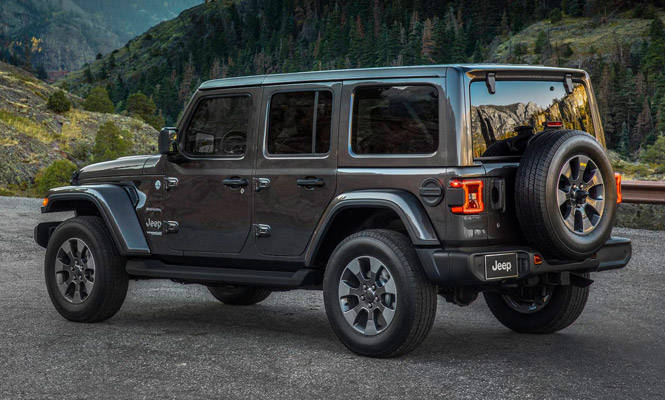 Engine and Safety features for India

The fourth-gen Jeep Wrangler introduces a new set of petrol and diesel engine at a global font. The old 2.8-litre diesel featured in JK version has been abandoned. In Europe, Jeep Wrangler gets a new 2.2-litre MultiJet II diesel engine, whereas in the US it is offered with a 3.0-litre V6 diesel unit. India-spec mode is anticipated to feature one of these two.

When we come to petrol-powered Jeep Wrangler, it gets a new downsized turbocharged 2.0-litre four-cylinder petrol engine along with the 3.0-litre V6 featured in the earlier version. Alike the diesel variant, the India-spec Wrangler will be available in any of the two engines.

Jeep has superseded the traditional 5-speed automatic with a new 8-speed unit, while a 6-speed manual is standard throughout the range.

The ongoing JK series Wrangler Unlimited is worth Rs 58.74 lakh (petrol, ex-showroom Delhi). But the addition of the three-door Wrangler may lead the new JL series to be labelled with a comparatively lower price at around Rs 50 lakh.