In order to clear the stocks, car manufacturers are offering massive discounts along with benefits. But still, all these strategies did not give them benefit as the sale in the month of April 2019 is not so good. There are many models which did not see any growth in the MoM. In spite of getting the upgrades and new launches, cars like Santro, WagonR, Ciaz, XUV300, Civic, Ignis, etc did not see any growth. The negative growth can be seen in all the segment.

In the month of April 2019, 25 best selling cars has been selected in which Maruti Suzuki has left everyone behind and has topped the list by holding 7 slots out of 10. Maruti Alto is the first in the list having 35 per cent of MoM growth. The possibility of this to happen is the BS-VI compliant engine that the car received recently due to which the sales has been increased to 22,766 units from 16,826 units in April.

The next position is grabbed by the Dzire but there was a decline of -7 per cent in the sale i.e. from 19,935 to 18,522 units. Three slots has been taken by the Baleno seeing a growth of 1 per cent of sale from 17,264 to 17,355 units. Swifts sit on the fourth position seeing 11 per cent of sales growth while the Vitara Brezza and WagonR saw a decline of -17 per cent and -30 per cent respectively.

Hyundai continuous as the second best car manufacturer in the country taking three slots out of 10 in the list. Creta and Elite i20 saw a decline of -8 per cent and -14 per cent respectively. Grand i10 takes the 10th position in the list have a magnificent growth of 33 per cent. While the other Hyundai cars like the Verna and Santro lost sale by -8 per cent and -17 per cent respectively. 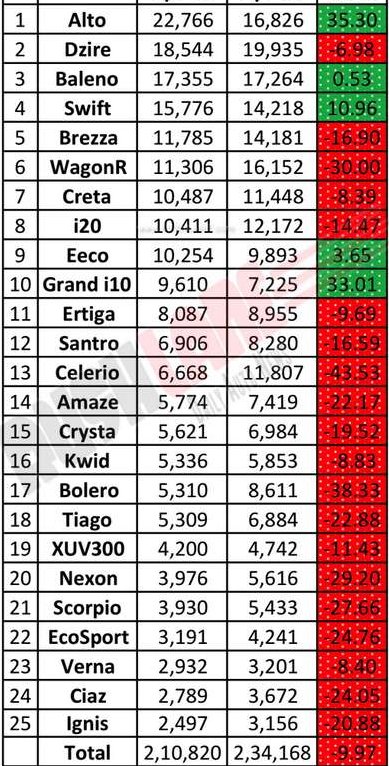 Amaze is the only Honda car that has made into the list which saw a decline of -22 per cent. The cars that saw a huge decline includes Mahindra Scorpio (-28%), Tata Nexon (-29%), Mahindra Bolero (-38%), and Maruti Celerio (-44%). The cars that did not make into the list includes Honda Civic which only sold 369 units in April while in March 2,291 units were sold.

Other than these reasons, the experts also feels that the customers are not purchasing cars now is because of the BS-VI compliant vehicle which will come from April 2020. By this we can say that, the customers want to try new technologies due to which they are avoiding the old technology vehicles. Many customers are on hold because they want to purchase hybrid and electric cars.