BMW Comes With Its 7 Series; An Extensive Mid-life Facelift

BMW has unveiled its primary flagship sedan of 2019. It is the BMW 7 Series with a new bold look to its three-year-old luxury sedan. So, it is a Facelift!

The Model has been designed as per a brand strategy, proposed by the chairman Harald Krüger in 2017, which laid emphasis on the interior luxury and a shift towards a more formal designing. Refreshed flagship sedan sports X7 SUV-inspired, styling

Talking about the wheelbases, the fresh 2019, 7 Series has been offered in standard-wheelbase along with long-wheelbase guises and both models have been extended by 22mm. Thus, their final length becomes 5,120mm and 5,260mm respectively. The styling has been changed in order to make the model look more attractive.

A new chromed kidney grille has replaced the old grille style. The new chromed kidney grille is similar in size to that of the recently revealed X7 and as compared to the old 7 Series’ grille, it is 40 per cent bigger. The grille is extending back into the leading section of a newly contoured bonnet. It goes deeper into a re-profiled front bumper. Within the lower air ducts there lies new chrome highlights.

As compared to refinement levels of Munich’s flagship sedan, the BMW 7 Series sedan adopts 5.1mm thicker side glass and in order to improvise airflow, new front wings are added to its features which helps in reducing buffeting at speed. *Changes have been made in the sound-deadening material in the rear wheel arches as compared to the earlier models.

There are some minor visual changes done at the rear, which are in addition to the old model visuals. Now, the rear receives more heavily structured OLED tail-lights with new lens graphics connected by a full-width LED light band. This LED light band in combination with the daytime running lights get illuminated adding beauty to the Visual section of the Sedan.
The facelifted 7 Series have wider chrome-tailpipe trims which are integrated into a reworked bumper.

Reversing Assistance feature is an addition to its updated Parking Assistant function which enables to back up the car by up to 50m on the way it has been driven on.

The 2019-model of the 7-Series is powered by a range of below features:

As per the study, amongst the most powerful of the new 7-series diesel is the 750d xDrive and the other long wheel-based 750Ld xDrive.
The new 7 series model is a turbocharged version of BMW’s having six-cylinder engine that develops 398hp and 759 Nm of torque.

In combination with the rear-wheel-drive 745e and 745Le, there is an updated plug-in hybrid drivetrain with their four-wheel-drive sibling, the 745Le xDrive.

The new facelift 7 Series comes with a turbocharged 3.0-litre in-line six-cylinder petrol engine with an electric motor. The Electric motor provides a total system output of 393hp and 599Nm of torque that results in a 0-100kph time of 5.2sec.

Read Also:- BMW Hybrid Hypercar May Be in Production

The Battery in the system is a 12.0kWh lithium-ion battery. The 745e has been claimed to deliver an electric range of up to 58km, supplying it with a combined cycle consumption of 134.5mpg with average CO2 emissions of 48g/km. 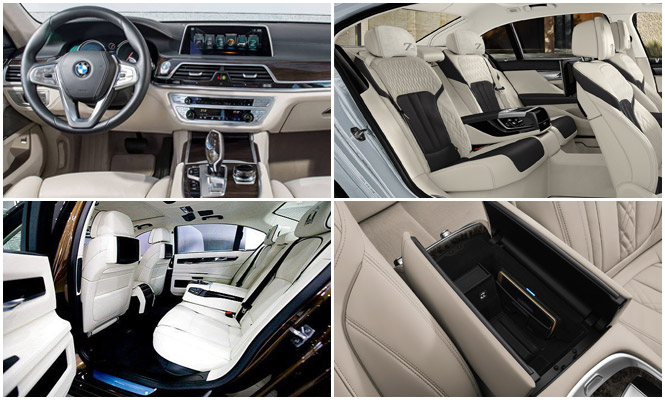 The facelifted 7 Series comes with standard supportive features as below:

The facility of luxury saloon could be extended with optional rear-wheel steering which is an added agility.

The X7 of BMW range that got launched late last year along with the 7 series, would give strong competition to the famous rival, the Range Rover.

Nowadays, design link has become a strategy and a tactic to create familiarity between the future launching model, the same has been done with the 7 series such that comparison and familiarity could be made between the two flagship models.

The target market for both the cars are the high-flying luxury car buyers, mostly from China. The preference of the customers there is very aggressive car designs! Thus hopefully, this new strategy of design shift, to cater to such tastes in the world’s biggest new car market, would be definitely appreciated.

In India, the new 7 Series and the X7 are expected to be launched this year and the flagship SUV are scheduled to be arriving in September 2019.