Mercedes-Benz has put the wraps off from its last V12-powered S-class, the S 65 Final Edition. FYI, this Final Edition will only be produced in a limited count of 130 units and will receive an exclusive Obsidian black metallic paint scheme with copper and carbon fibre accents.

At the exterior front, the components such as front air intakes, 20-inch multi-spoke alloys, side skirts and rear diffuser get special treatment of matte bronze shade. While the A C-pillar-mounted AMG crest and blacked-out quad exhaust tips add to its appeal. Inside the cabin, the S 65 Final Edition continues with the black and bronze theme. In addition to this, it gets Black Nappa leather upholstery with copper stitching while the carbon-fibre trim comes with black and copper stitching. Moreover, the copper-coloured ambient lighting and floor mats with copper-coloured contrast stitching are also the part of interiors’ package along with the centre console placed '1 of 130' badge, which confirms the limited-edition status of the luxury sedan. 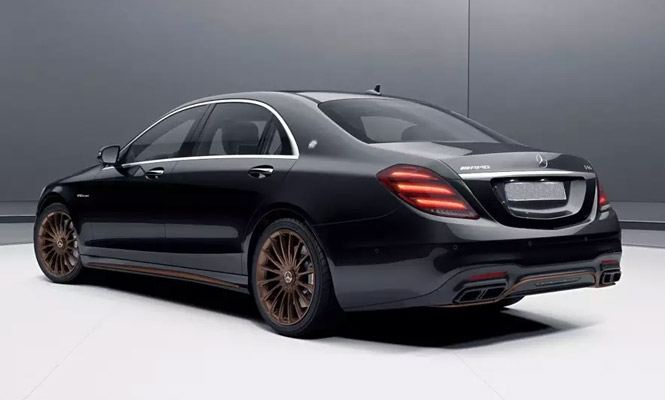 Under the hood, the S 65 Final Edition is laden with AMG’s robust 6.0-litre bi-turbo V12 petrol engine. The motor is rated to return the power output of 630hp and 1000Nm. Continues with its true AMG spirit, the S 65 Final Edition gets the 'One Man – One Engine' plaque in the engine bay finished in gloss black as opposed to the sliver.

The S 65 Final Edition will be exhibited in front of the global audience at the 2019 Geneva motor show along with another final edition model from the brand, the convertible Mercedes SLC Final Edition. In its segment, the luxury sedan has one and only competitor from BMW that’s the M 760 Li sedan, also powered by a twin-turbo V12 engine.