Japanese carmaker Toyota is all set to launch its all-new eighth-gen Camry hybrid on 18th January 2019 in India. Because of the popularity of the hybrid cars, the Toyota is not in a mood to introduce the petrol variant at least for now.

The rival of Honda Accord Hybrid, Skoda Superb and VW Passat i.e. the Toyota's new Camry hybrid is all set to bring revamped chassis, change in design language with additional equipment including an efficient hybrid engine.

The new Camry is based on the New Global Architecture (GA-K) platform of Toyota, also carried by the new Lexus ES 300h. There is a V-shaped element up front and a grille that associates the headlamps and a large air dam in the new Camry. It has famous creases along the sides and a higher boot lip. It is said to be the most aggressive-looking Camry till now.

The new Camry Hybrid will be having the latest 2.5-litre four-cylinder petrol engine churning out 176hp and 221Nm of torque mixed with an 118hp (88kW) electric motor totalling output up to 208hp.

The Camry is furnished with the Toyota Hybrid System II which has a lighter PCU (Power Control Unit) and replaces the battery under the rear seat from the trunk. Toyota confirms that the energy loss will be less which makes it more efficient hybrid system. 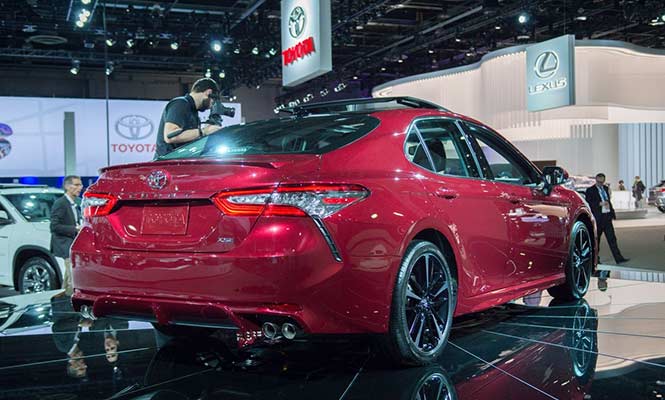 The interior of the Camry has also been upgraded. The current drab dashboard of the cars has gone out of fashion. A new 8.0-inch touchscreen infotainment system is mounted on the top of the centre console along with a new 10-inch head-up display and a 7.0-inch multi-infotainment display in the instrument cluster.

The Corporate Average Fuel Efficiency (CAFE) norms will be met by the Toyota with the help of the Camry hybrid. It will be introduced in 2022 and a strict limit is specified by them of 113g of CO2 per kilometre (for the fleet) which is below the present 138g.

The Camry will continue to get the benefit from the first phase of the plan because the second phase of the Faster Adoption and Manufacturing of Hybrid and Electric vehicles (FAME) has not been established yet. Same as the former car, it will also have to pay huge tax because hybrids has the highest tax rate under GST. The new Camry will cost approx. Rs 39 lakh (ex-showroom).