Apache RR310 is being offered by TVS is the most awaited motorcycle which was launched by the company last month at a price of INR 2.05 lakh (ex-showroom). Previously, it was debuted at Auto Expo 2016 in the concept form as the Akula. TVS is considered as the third largest automobile manufacturer in India, recently disclosed that Apache RR 310 will be available for purchase at selected dealership stores throughout the country.

The delivering of Apache RR310 has been commenced by TVS. According to the images shared on social media revealed that TVS Apache RR310 has delivered to one of its customers at Cochin TVS, Ernakulam (Kerala). The customer, whose name is Vivek Vijay took a delivery of red- colored Apache RR310. On the contrary side, some of the reports stated that only black colored units would be delivered initially which proved false 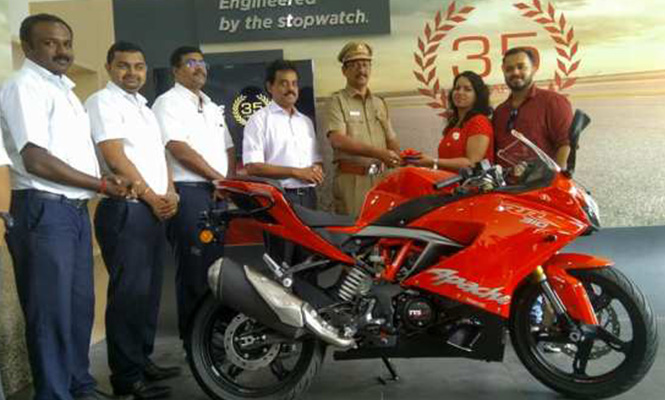 Apache RR310 is powered by a 312cc single cylinder, liquid cooled, fuel injected engine. The engine of the motorcycle produces a maximum power output of 34 PS at 9700 rpm and a torque of 27.3 Nm at 7700 rpm. Transmission duties are being carried out by six-speed gearbox. The company claims that motorcycle can hit 0-60 kmph just in 2.9 seconds whereas the maximum speed is 160 kmph.