Yamaha Aerox that is a sportier scooter offering in 150cc segment, has been spotted at a dealership in India. This event suggests an early arrival of the scooter in the Indian market anytime soon. Earlier than this, the scooter can to sight ahead of 2018 Auto Expo while performing test runs in the country. Meanwhile, a number of scooters from different manufacturers were lined up to hit the Indian ground. In the segment, it will go head to head with the lately introduced Honda Grazia. How both these scooters stack up against witnesses in this comparison post.

Yamaha Aerox 155 that is recently available on sale in countries like Malaysia, Indonesia, Philippines and Vietnam, is stylish and sportier in nature. The Maxi-scooter styled Aerox features sporty upfront apron with a racing stripe like feel. Besides, there is twin eye LED headlamps and LED taillight along with a smart key system that is prime USP of the scooter. Furthermore, the fitments on the Aerox skin which will pull your attention includes mobile charging point, digital instrument console with 5.8” LCD screen and expected front disc brake. 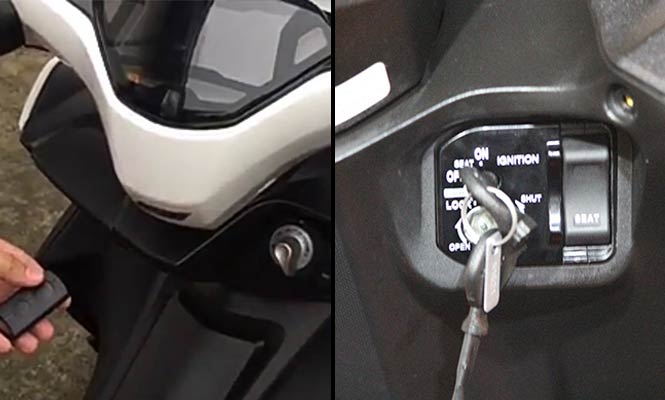 On the other hand, Honda Grazia shares lots of design cues from its sibling Honda Dio. The front of the scooter gets all-LED headlamp assembly on apron similar to the Dio. The full LED lights are the first in the class feature that is sported by turn indicators. The side body panels make remind of the most selling Activa 3G with a slight revision in form. The newly designed rear gets a pair of grab rails and large tail lamp assembly similar to the Dio, however it receives integrated turn indicators.

In terms of power, the Yamaha Aerox is packed with a 155cc, liquid-cooled, single cylinder engine with brand’s patented Blue Core technology. The first liquid-cooled and fuel injected scooter in India, churns out the maximum power of 14.8 bhp power at 8,000 rpm and 14.4 Nm torque at 6,000 rpm. 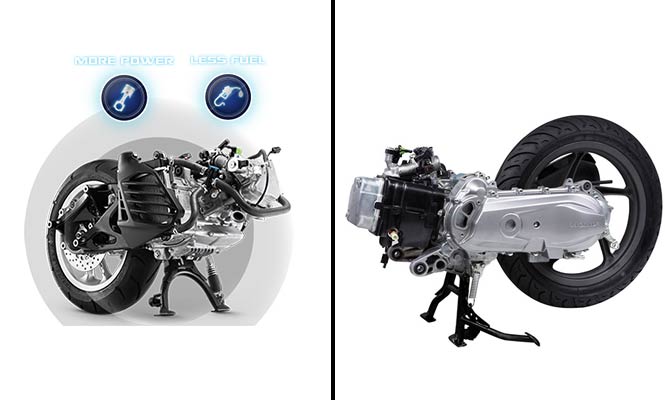 The Honda Grazia, on the other hand, gets a 124.9cc air-cooled motor that in association with a CVT automatic unit rolls out 8.52 bhp at 6,500 RPM and 10.54 Nm of torque at 5,000 RPM. The engine is in integration with Honda’s patented Eco technology which helps in reducing internal friction and offering better fuel mileage.

The Yamaha Aerox stands on 14-inch wheels that are shod up with 110 section front and 140s section rear tyre. The suspension setup comprises telescopic front forks and twin rear shock absorbers. The braking comes from a front disc and rear drum brake. The disc brake is armed with ABS for ensuring rider’s safety. 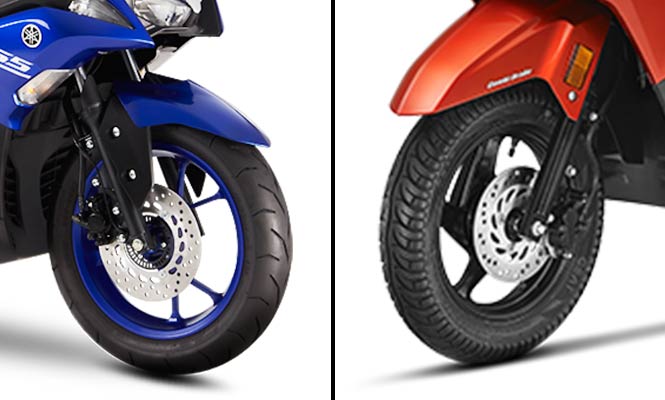 Honda Grazia at the front end gets a telescopic suspension and orthodox single spring suspension at the rear end to complete suspension setup. The drum brakes at both wheels in association with CBS feature take care the braking duties. Furthermore, there is an option of front disc. Apart from this, the scooter furnishes a special 4-in-1 lock that besides powering scooter and lock the key entry, also used to open seat and small storage box.

In the Indian biking industry, the Yamaha Aerox is likely to launch in the price vicinity of INR 75,000 – 80,000. Maybe, the Japanese giant could miss on some premium features to keep the scooter price in check in order to compete aggressively in the segment.

The Honda Grazia, on the other hand, is on sale in six attractive colour options including Matte Marvel Blue Metallic, Neo Orange Metallic, Pearl Amazing White, Pearl Night Star Black, Matte Axis Grey Metallic and Pearl Spartan Red. The HMSI is asking for INR 57,897 (ex-showroom Delhi) for the base variant of Grazia.

By considering all the aspects used in comparison, as of now the Honda Grazia is a winner. It is more appealing and features more equipment as compared to the Aerox. However, in terms of power, it looses owing to less powerful engine unit. While the pricing is a major concern that makes it a true winner in the budget-friendly Indian biking industry. Remaining will be clear post official revealing of Yamaha Aerox.

2019 Honda Grazia With Not More Than New Decals Revealed
Views: 1979